Why Is Florida Such A Dangerous State To Drive In? 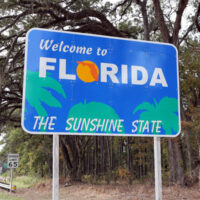 Florida ranks second overall in the number of pedestrian deaths per capita and routinely ranks in the top three for states with the most traffic accidents per capita. Further, it is always among the top three when it comes to rankings for “the most dangerous states to drive in” with the other two being California and Texas.

Most of California’s problems are related to California. There, you have severe infrastructure problems in places like San Francisco and Oakland, but also in Los Angeles, you just have more drivers and a larger percentage of the population that relies on personal vehicles to get around. Los Angeles is notorious for being a place where you don’t want to walk anywhere. More vehicles on the road causes more accidents.

Unfortunately, some situations don’t lend themselves very well to statistics. While you can point to infrastructure issues with the civil engineering of San Francisco, a lack of infrastructure in Oakland, or a high percentage of individuals who rely on personal transportation in Los Angeles, Florida might just be a state where there are a lot of bad drivers.

Florida has a bad attitude toward driving

Experts believe that Florida has a culture of aggressive driving, speeding, unsafe lane changes, and distracted driving. Infrastructure remains a consideration as Florida ranks 13th overall in dangerous roads or “road health”. Another major issue is that Florida has a higher percentage of unlicensed and uninsured drivers than other states in the country.

What’s clear is that Florida has a driving problem. Part of the issue is related to population. Places with more people will show a higher number of fatal and non-fatal accidents per capita. Since Florida is the third most populous state in the country and ranks about third in the overall number of accidents per capita. So, even though we’re adjusting the numbers for population, the most heavily populated states are always those that contribute the most fatalities. More cars on the road mean the likelihood of an accident will increase. This is as true for Wyoming as it is for Florida.

Fixing a cultural attitude is difficult. More education, better enforcement policies, and producing safety-first infrastructure has been shown to reduce driving fatalities in places like Oakland and San Francisco. However, unsafe driving, illegal speeding, reckless driving, drunk driving, and distracted driving remain the most likely reasons that an accident will occur. You just can’t build enough infrastructure to prevent the problem when individual drivers are placing themselves and others in danger. Meanwhile, drivers are liable when they cause an accident, but a high percentage of Florida drivers are uninsured.

Injured in a Florida car accident? The Florida personal injury attorneys at Halpern, Santos & Pinkert can help you recover damages related to your injuries. Call today to set up a free consultation and we can begin the recovery process immediately.