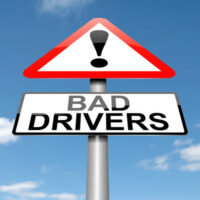 A recent accident caught on video shows a motorcyclist who was going the speed limit in heavy traffic get cut off by an SUV attempting to make a left-hand turn without looking. The motorcycle strikes the SUV head-on, but the rider is able to skid the bike into the vehicle, lodging the bike under the front end. The man barely survived the accident. The driver confessed to the police that he never saw the motorcyclist coming.

Now, the accident is the subject of a major lawsuit against Uber and it isn’t the only one. The driver in this crash had been cited over 27 times for various violations. This included speeding violations and an accident that resulted in serious injury. Nonetheless, Uber hired the driver without an issue and afforded him the opportunity to get behind the wheel where he injured yet another person.

There are two different standards for vetting drivers. So long as your license is not suspended or revoked, Uber appears okay with allowing you to drive livery for them. The lawsuit hopes to ensure Uber does more than make certain that the new driver has a valid license, and forces Uber to vet their drivers more effectively.

The law wouldn’t allow Uber to get away with forcing all of these claims through the private insurance of their own drivers. So instead, they created a company-wide insurance policy that insures drivers while they are driving. This policy pays up to $1 million. However, what if a plaintiff has injuries in excess of $1 million? Then, it gets a little more complicated.

The plaintiff must make negligence allegations directly against Uber itself to state a negligence claim against the company. Uber will deny they are liable beyond the $1 million policy limit. They have likely offered the $1 million limit and had their offer rejected. This will force the plaintiffs to litigate the claim by making specific negligence allegations against Uber. We already know what these negligence allegations will be. The plaintiffs will claim that Uber imperils the public by giving livery work to unqualified and dangerous drivers who inevitably cause serious accidents causing injury. Even with contractors, companies owe some duty of care to the public to ensure the drivers are qualified for the job. So the allegations are strong enough to force the matter before a jury. It is unclear what Uber will argue to defeat these claims. It sounds unlikely that they will explain to the jury that they don’t owe the public a duty of care to ensure that their drivers are competent. Since there’s video, it will be difficult to defend their driver.

If you have been injured by a livery service, the Florida personal injury attorneys at Halpern, Santos & Pinkert can file a claim on your behalf and pursue the matter before a jury, if necessary. Call today to schedule a free consultation and learn more about how we can help.