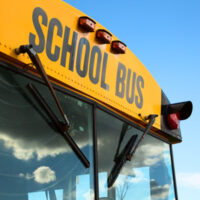 The family of a 6-year-old child who was killed shortly after being escorted off a school bus has filed a lawsuit against the school district and the manufacturer of the bus. According to the lawsuit, the child was the last in a queue of children who had just been dropped off. The bus driver began moving the bus before all of the children had cleared the front. The bus driver did not notice that there was a child still in front of the bus. The driver ran over the child, killing her instantly.

In most cases, school buses have arms that create a crossing barrier in the bus driver’s blind spot that forces the children to cross in front of the bus where the bus driver can see. In this case, the district paid for new 2021 buses that did not have a crossing arm to prevent children from walking in the blind spot. Hence, the manufacturer of the bus is being sued along with the district for not paying for a relatively cheap safety feature that would have saved the life of a child. Beyond that, someone should have been walking with the child to prevent this accident from occurring. Why these policies were not adhered to is unknown. When it comes to school bus safety features, there is no standardized list of requirements. So individual districts have broad discretion in what safety features they can employ.

Below, we’ll take a look at the claims against the bus manufacturer and discuss how they relate to the district’s duty of care in this lawsuit.

It’s complicated. The bus company will clearly blame the driver for the accident that cost the child his life. However, the lack of a protective crossing arm set the stage that led to a fatal accident. So, the bus manufacturer is being sued for not including a standard piece of safety equipment that you’ll find on the vast majority of school buses across the country. Indeed, you may be surprised to know that there are buses out there dropping kids off without protective crossing arms. So, the lawsuit against the bus manufacturer will move forward.

In this case, the manufacturer of the bus is Blue Bird. The bus was manufactured without cameras, sensors, or the front blind spot crossing arm. All options would have been available for the past couple of years. It was the district’s choice to pay for buses with lax safety features and then fail to train drivers on policies to avoid accidents. However, no criminal charges have emerged from the matter as of yet. The school district has since added crossing arms to all of their school buses.

The failure or the lack of a safety feature on a machine can give rise to a personal injury lawsuit. Contact the Florida personal injury lawyers at Halpern, Santos & Pinkert today to schedule a free consultation and learn more about how we can help.