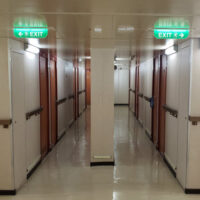 A Miami jury awarded $10M to the passenger of a Carnival cruise who was sexually assaulted by one of the company’s employees. The incident took place in 2018. The victim claims she was forced into a storage locker and raped by a male employee. The jury separately found that Carnival was not negligent and did not intend to inflict emotional distress on the victim. However, Carnival is still responsible for the lawsuit thanks to corporate personhood and the concept respondeat superior. Essentially, the company is liable for the negligence or malice of its employees. Hence, claims are made under two theories, the first is respondeat superior which holds the company vicariously liable for the conduct of the employee, and the second is a negligence allegation that holds the company responsible for not adequately supervising the employee.

The victim was on the last night of her cruise, eating and drinking with friends, after which she became highly intoxicated. The plaintiff was visibly intoxicated and at one point, tripped and fell on her way back to the pool deck. She struck her head on the ground. The plaintiff did not remember what happened next, but the next thing she knew, she was in a storage locker with an assailant.

Carnival maintained that the encounter was consensual and plans to appeal the decision. They claim that an FBI investigation did not uncover sufficient proof that a sexual assault occurred. The employee was fired immediately for violating Carnival’s policy on fraternizing with guests. Carnival issued a written statement that the victim chose to go into the storage locker, but the court found sufficient reason to declare, as a matter of law, that the victim was held in the closet against her will.

The employee was never arrested or faced charges over the alleged assault. However, the standard of proof in civil cases is much lower than in criminal cases. A prosecutor expects that there is proof of wrongdoing before the matter hits a jury. A civil litigator needs only to convince the jury that it’s more likely than not that their client was assaulted. Since the jury found that the passenger had been raped by the employee, they would have to argue that the judge erred in allowing the jury to hear specific evidence against Carnival. You can’t simply say that the jury reached the wrong conclusion to appeal a verdict. You need to establish that the law was not followed properly in reaching the verdict. Otherwise, everyone would appeal every case on the basis that the jury got the verdict wrong forcing the case to be retried over and over again. It remains unclear what, if any, basis Carnival has for appeal.

Halpern, Santos & Pinkert file lawsuits against cruise lines that don’t adequately protect their guests from security risks. Call our Florida personal injury lawyers today to schedule a free consultation and learn more about how we can help.