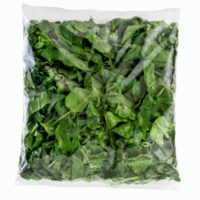 A woman claims that listeria in contaminated spinach resulted in the miscarriage of her unborn baby according to a new lawsuit filed in Pennsylvania. She is naming both the grocer who sold her the spinach and the company that produced the spinach in the lawsuit.

The woman was quarantining after being diagnosed with COVID-19 when she drank a smoothie made with the defendant’s spinach. Prior to this incident, she was sent home from the hospital to quarantine after being diagnosed with COVID-19. Her baby was healthy at the time. Four days later, the woman was back in the hospital. Doctors determined that the fetus no longer had a heartbeat. The sole cause of death was ruled to be listeria. The woman believes that the spinach was contaminated with listeria resulting in the death of her unborn baby.

Five days after the death of her baby, the company that produced the spinach issued a voluntary recall in connection with more than 200 of its bagged salad mixes. The salad mixes were connected to 10 confirmed listeria outbreaks across 8 states. The plaintiff’s spinach was among those in the recall. The mother was 30 weeks pregnant when the incident occurred.

Listeria is generally unpleasant but not fatal. Those who are most likely to suffer severe complications due to listeria are pregnant women, newborn babies, the elderly, and those with compromised immune systems.

Is it possible to defend this lawsuit?

This is pretty much a slam dunk as far as food contamination lawsuits go. You have a voluntary recall related to listeria plus and the medical examiner ruling that the cause of death of the unborn baby was listeria. The manufacturer is strictly liable for making the public sick. In other words, a plaintiff does not need to establish what sort of negligence occurred making the defendant liable. The plaintiff need only establish a connection between the death of her baby and the contaminated spinach. So, once the element of negligence is established, the defendant only has the option of disputing damages. This usually comes down to a negotiation between the lawyers for the plaintiff and defendant finding a reasonable figure that makes sense in the context of other cases involving the loss of a baby. These figures can vary wildly from one state to the next, so there’s no real way to guess what the figure will be.

Nonetheless, the manufacturer of a food product that causes injury or death is liable. A customer is not expected to analyze their spinach before eating it and there would be no basis for blaming the customer for the loss of her baby. The spinach producer and grocery store will likely move to settle this suit quickly and quietly.

Halpern, Santos & Pinkert represent the interests of those who have been injured due to defective products and contaminated food. Call our Florida personal injury lawyers today to schedule a free consultation and we can begin discussing your injuries immediately.