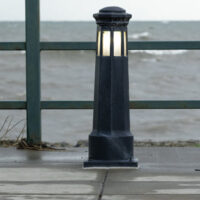 Two plaintiffs filed separate lawsuits over a single incident that occurred in 2018. One man leaned up against a light fixture which broke off and fell into the water causing him to be electrocuted. He died as a result of those injuries. Then, a second man who attempted to save the first man also jumped into the water after him and was also electrocuted.

Lawsuits were filed against the City. Both of those were settled for less than $200,000. However, a second lawsuit was filed against the contractor who paid to do work to remove bollards. According to the company, they began work on the project but were then asked to stop after city officials said the disruption to traffic was costing them Spring Break tourism. The company never touched the lights again, they claimed in court.

The plaintiffs alleged that the contractor was negligent for not warning the city about the dangers related to the bollards. The bollards did not have ground circuit interrupters and were positioned too close to the water.

The jury awarded $8 million to the plaintiffs for their suit against the contractor and found them 75% liable for the accident.

Various liability means that multiple parties are considered negligent for an injury. In this case, one man died and another was severely injured in an attempt to save the other man’s life. The deceased’s family filed a wrongful death lawsuit against the City of Oklahoma and the contractor who did work for the City. Oklahoma City was able to settle the matter for a small figure due to strictures in place against filing lawsuits against the government. In this case, the amount of money was capped due to rules in place against suing the government.

The same cannot be said for the contractor. No such protections exist which is why a second suit was filed against the company that did work for the City. In this case, the plaintiffs were able to recover a reasonable sum of money for the loss of a loved one. The contractor was held negligent for stopping the work without informing the City concerning any dangerous conditions that they would have been aware of through their work on the bollards. Had the company reported the issue to the City and still been required to stop the work, then it would have been much more difficult to blame them for the death and injury. If the City doesn’t act on the professional recommendation of the contractor, then the liability is City’s exclusively. If the City does act on that recommendation, then the bollards are neutralized and no one loses their life that day.

If you have suffered an injury due to electrocution, the Florida personal injury lawyers at Halpern, Santos & Pinkert can help you file a claim against the company responsible for the danger and recover damages related to your injuries, lost wages, and pain and suffering. Call today to learn more!