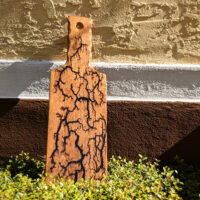 This isn’t the first time that an online meme encouraging dangerous behavior has resulted in the avoidable death of children and adults. A 44-year-old woman and her 52-year-old partner were electrocuted and then burned to death after they tried something they saw online. Initially, police thought that arson was to blame for the deaths. However, they soon discovered that the couple had attempted something called “fractal wood burning”.

What is fractal wood burning?

It’s a process for creating a geometric design known as Lichtenberg figures. The pattern is often found in the scarring of those struck by lightning. They were discovered by a German scientist who was conducting experiments on static electricity. The designs resemble tree branches and tend to look nice. As an exciting experiment you can try on your own, the process has gained traction on social media with at-home artists trying it for themselves. Fractal wood burning now has a death toll. It now has its own hashtag and hundreds of how-to videos on the internet explaining how to do it yourself.

The problem is that it is potentially dangerous. Power supplies from microwaves or car batteries are used to provide electricity to the wood. A chemical solution that increases the conductivity is then applied to the wood. Fractal wood burning has been cited as the cause of at least 33 deaths since 2016. The American Association of Wood Burners has banned the publication of articles discussing fractal wood burning. Even those experienced with the process have lost their lives. It only takes one mistake and you can die. In this case, the disassembled microwave the couple used as a power supply caused their electrocution deaths and their house to burn down.

Can they sue anyone?

Nope. Adults have little recourse to sue when they make the choice to do something dangerous and then die or are injured as a result of that. While lawsuits against social media sites encouraging dangerous behavior have been filed in the past, it’s a new frontier and most of the plaintiffs have been children who died because of the misuse of an app or took their own lives due to social media addiction.

They cannot sue the company that engineered the microwave because they misused a dangerous component of the microwave while knowing that they were doing something potentially dangerous. Any jury would assign the liability to them and not the manufacturer.

On the other hand, if the fire they caused injured a third party, a neighbor, or caused significant property damage, a lawsuit could be filed against their own estate seeking the recovery of medical expenses and property loss. So, if you choose to try fractal wood burning, you may end up having your estate sued after you die.

You can’t sue if you electrocute yourself to death. Otherwise, you probably have a case. Call the Florida personal injury lawyers at Halpern, Santos & Pinkert today to schedule a free consultation and learn more about how we can help.