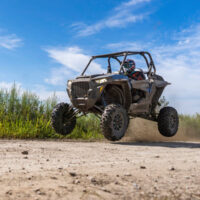 The manufacturer of a popular ATV is being sued after a teen had to have his arm amputated after a terrible crash. According to the complaint, the teen was using the ATV when it flipped over. His arm did not stay in the cabin of the ATV and instead was crushed when the vehicle flipped over. The teen’s arm had to be amputated above the elbow to avoid further injury. The plaintiffs allege that the cabin had a design flaw that rendered it unnecessarily dangerous to its drivers. In this article, we’ll take a look at the complaint.

The plaintiffs allege that the placement of a safety net around the cabin would have prevented the plaintiff’s extremities from being exposed to danger. The plaintiffs have alleged strict liability, negligence, and gross negligence. Below, we’ll take a look at the allegations.

Product liability lawsuits include a presumption of liability when a product is manufactured to the general public and does not behave the way it’s supposed to, causing injury. The plaintiff does not need to prove negligence because the presumption of negligence is already apparent. The plaintiffs placed a dangerous product into the stream of commerce and this inevitably led to an injury. So long as the device wasn’t modified or used in a manner that could not be anticipated by the manufacturer, the manufacturer is generally liable.

The second allegation involves the failure to warn or to apply safety technology that could have prevented this plaintiff from losing his arm. In this case, the plaintiffs allege that the company failed to warn buyers about the dangers of placing their arms outside of the cabin space or employed netting that could have prevented the arm from being crushed under the vehicle.

Have you been injured by a defective product? If so, the Florida personal injury attorneys at Halpern, Santos & Pinkert can litigate the claim on your behalf and help you recover damages related to your medical expenses, lost wages, and reduced quality of life.