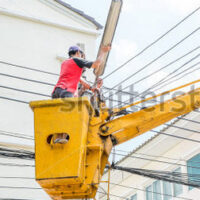 A former utility lineman was awarded $63 million after a terrible electrocution accident led to him requiring both of his arms amputated. The worker came into contact with 14,000 volts of electricity. In this case, the company from which the lineman received his training was faulted for failing to properly train him safely. Specifically, the plaintiffs argued, the company never properly trained him in the use of rubber sleeves and protective rubber gloves which would have likely saved his arms.

Linemen routinely work along live power lines and avoiding injury and death is one of the key principles of their training. Protective equipment that avoids serious burn injuries and organ death is among the most obvious principles to instill in a prospective lineman. Nonetheless, these lineman were never properly trained in its use.

A verdict like this doesn’t just compensate a victim of poor training, it sends a message across the industry that they are not doing enough to protect their workers. While a lot of companies are feeling a pinch right now, industries must still meet standards imposed by the government. When a company takes shortcuts in training potential employees, those employees and the employees they work around are exposed to avoidable risk. In this case, the jury sent a shockwave throughout the industry that will hopefully prevent future accidents.

The defendant unsuccessfully argued that they met or exceeded all OSHA requirements. They also strongly suggested that the company that employed the plaintiff was liable for his injury. However, the county that employed the company that trained linemen was held liable for failing to train prospective employees on the use of lifesaving PPE. They were faulted for failing to provide a thorough and complete training.

The defendant was contracted by local municipalities to provide training for prospective linemen across the state. If the courts had determined the employer was at fault, it likely would have barred any lawsuit from moving forward. The plaintiffs turned the case around and made it about government-contracted inadequate training, suing the company that provided inadequate training instead of attempting to file a lawsuit against the employer or recover workers’ compensation benefits. This proved useful because they secured a massive verdict in the process. It remains unclear on what basis the defendants will file an appeal.

The Florida personal injury lawyers at Halpern, Santos & Pinkert file lawsuits on behalf of those injured or killed by electrocution injuries. Call today to schedule a free consultation and we began preparing an action plan immediately.