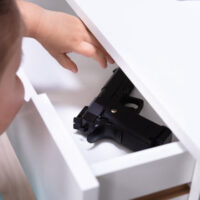 A woman and the company she operates are being sued after an unattended gun made it into the hands of a three-year-old boy who shot himself to death. According to the lawsuit, the defendant knew that there were loaded pistols in the area. The pistols were not in a gun safe as required by law. The parents of the three-year-old have filed a wrongful death lawsuit against the woman.

The plaintiffs contend that the defendant kept two guns in a soft case in her bedroom. The case was not secured by locks. Both guns would have had safeties that were likely not engaged at the time of the accident.

The woman was dating the brother of the father who filed the lawsuit.

Yes, gun manufacturers have immunity from personal injury lawsuits, but gun owners do not. If a weapon under your control discharges accidentally, then you can be held liable. In most cases, it will be the gun owner’s responsibility to ensure the weapon is safely stored where children cannot access it. In some cases, however, it could be the gun manufacturer’s fault.

While gun manufacturers cannot face lawsuits related to individuals who misuse their products, they can face lawsuits related to product defects. One such lawsuit filed against a prominent gun company alleges that the gun has a hair trigger and accidentally discharges at random. In one case, a police officer was injured by the weapon. The police officer has since filed a personal injury lawsuit against the manufacturer.

Individuals can be held liable for negligent storage, negligent usage, or intentional misconduct. While it’s rare to find personal injury lawsuits filed against individuals, it does happen if the individual has enough money to cover the expenses.

Halpern, Santos & Pinkert files personal injury lawsuits against individuals and companies that cause injury due to negligence. Call our Florida personal injury lawyers today to schedule a free consultation and learn more about how we can help.