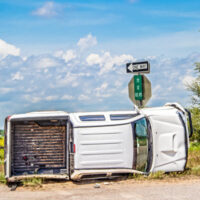 A Georgia jury ruled in favor of the children of a Georgia couple who were killed in a tire blowout accident. The pair were farmers who were on their way to pick up a part for their tractor when the Ford F250’s tire blew out resulting in a rollover crash. Both were killed in the ensuing accident when the cabin of the Ford F250 was crushed under the weight of the vehicle. In this case, the family was suing Ford because they argued that weak cabins were prone to crushing drivers and passengers inside the vehicle during rollover accidents. A picture of the vehicle shows the cabin entirely crushed down to the body of the truck.

A jury determined that Ford sold over 5.2 million trucks with this defect between 1999 and 2016. All Ford F250s manufactured in this time period have this flaw. Attorneys for the plaintiffs presented evidence of nearly 80 similar cases in which the cabin was crushed during a rollover accident. Ford has never issued a recall over the incident, largely because fixing the cabins on 5.2 million trucks would likely bankrupt the company. Nonetheless, this verdict could do the same.

A separate lawsuit was filed against Pep Boys related to the tire itself. In this case, Pep Boys was blamed for installing the wrong size tire on the vehicle causing the blowout. The jury determined that Pep Boys was 30% liable for the accident with the rest ostensibly assigned to Ford.

It is the largest settlement ever awarded in a personal injury lawsuit in Georgia.

Is the Fight Club formula real?

Edward Norton in the movie Fight Club is a recall coordinator who tells the audience that if the cost of a recall is greater than the cost of settling various lawsuits, then the company will settle the lawsuits as opposed to making the vehicle safer. Is it true? Is that what happened here?

The idea comes from issues related to the Ford Pinto and Lee Iacocca in the 70s. The Pinto would explode when it was struck in a particular way. Trauma to the areas surrounding the gas tank were noted by Ford before the car became available to the public. Ford surmised it would have cost less than $10 per vehicle to fix the problem. At the time, Ford’s engineers considered multiple solutions to the problem, but none were ever implemented under the direction of Iacocca, because, in his words, “safety doesn’t sell”. Nonetheless, a $1-dollar piece of plastic could have prevented the gas tank from rupturing and causing explosions. Nonetheless, the idea behind the Ford Pinto was to compete with foreign companies producing cheap cars.

Injured by a defective product or vehicle? Call the Florida personal injury lawyers at Halpern, Santos & Pinkert today to schedule a free consultation and learn more about how we can help.