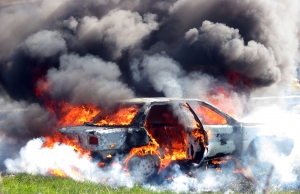 When an automobile catches on fire following a collision, it can be disastrous and in turn lead to catastrophic injuries, including third degree burns and death. Many times this occurs as a result of a defect, making it a particularly serious issue because remedying the defect could prevent secondary injuries due to the fire.

If a specific automobile tends to catch fire more so than others, this may be a sign of a defective design and a possible products liability case. This exact issue has recently come to light, as detailed in a recent New York Times article.

According to the Center for Auto Safety, Jeep Grand Cherokee models produced from 1993 to 2004 are extremely susceptible to fires and should be recalled. This conclusion was based on three different tests performed on the Grand Cherokees, all the results of which indicated that these automobiles have a high tendency when compared to other similar automobiles, such as the Ford Explorer or Nissan Pathfinder, to result in catching on fire following a rear end collision. It is estimated that there were approximately three million of these vehicles sold, many of which remain on the roadways today.

The federal safety agency recently granted a 2009 request made by the Center for Auto Safety to begin investigation of the Grand Cherokees from 1993 through 2004. In the request, it was stated that the Grand Cherokees had two serious problems; 1) that because the gas tank is behind the rear axle and slightly below the bumper, it is in the crush zone area, making it susceptible to puncturing and 2) that the “fuel filler pipe” is positioned in a way that allows it to be ripped away following a rear impact, thereby allowing gasoline to escape. Compounding these two problems makes these vehicles particularly susceptible to catching fire following a rear-end collision.

Chrysler, the manufacturer of the Grand Cherokee, has responded to these accusations by arguing that the Grand Cherokee met the federal standard for not leaking fuel in a rear impact and that investigations did not indicate the Grand Cherokee was more likely to catch fire as a result of the impact than similar vehicles. They claim that the car was designed with “sound engineering judgment and due care,” and did not have a design defect. N.H.T.S.A. signaled that they agreed with Chrysler based on their “preliminary review.”

An important factor in the recall determination is that when the 1993-2004 Grand Cherokee’s were produced, the federal standard was that a vehicle could leak a small amount following a 30 mph rear impact with the force of impact distributed evenly. This was a major concern and deemed not a high enough speed. Accordingly, it was changed in 2006; a vehicle must now pass a 50 mph rear impact and an impact that does not spread the force evenly. It is important to note that even if a vehicle meets a minimum standard, it can still be recalled as automakers have an obligation to produce safe vehicles.

According to Mark Arndt, an independent safety consultant, it is essential that survivors of 50 mph rear impact do not suffer secondary injuries from fires that would be preventable with the proper design. Mr. Arndt explained that the Grand Cherokee problems could be alleviated if the gas tanks were protected with a plate and that the vehicle have a valve that prevents leaks if the filler pipe is ripped free.

In 2005, the placement of the gas tank in the Grand Cherokee was changed, whereby it was shifted forward from a position next to the rear bumper to in front of the rear axle. On the face, this seemed to signify the unsafe nature of the prior design. However, a Chrysler representative explained that this was due to relocation of the spare tire and not for safety reasons.

Nonetheless, if you own a 1993 to 2004 Grand Cherokee, it is important to keep a watchful eye and open ear for a recall notice. If the vehicle is recalled, Chrysler may not have to compensate owners of recalled vehicles if the vehicle is at least 10 years old. However, product liability suits can be filed against Chrysler for injuries caused by these vehicles provided they are not barred by the statute of repose.

At Halpern, Santos & Pinkert, P.A., we handle all types of automobile products liability cases, including those involving automobile fires. If you or a loved one is injured as a result of a car fire, it may be the result of a design defect. Accordingly, please contact a Florida auto defect accident attorney immediately to help determine if you have a viable lawsuit.