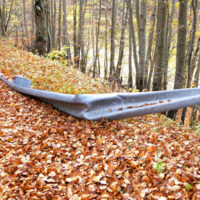 You’ll see guardrails along the sides of highways, on bridges, and just about anywhere where careening off the road would create a serious risk of injury or death. In most cases, the guardrails prevent serious accidents. In other cases, they don’t do enough. However, in a growing number of cases, guardrails actually cause death.

The State of Missouri recently settled a lawsuit filed against a state contractor who installed thousands of guardrails around the state. These rails were implicated in a number of avoidable deaths. The settlement covered the cost of removing and replacing all of the guardrails.

The general sense of a guardrail is that it should absorb the energy of an out-of-control vehicle, prevent the vehicle from entering a dangerous area, and minimize the impact suffered by the driver. However, while guardrails may seem like a simple enough design, how they absorb the impact requires several teams of physicists to calculate. Suffice it to say, when some guardrails fail, the metal is hard enough to penetrate the cabin of the vehicle impaling drivers and passengers. Such guardrails have been linked to a growing number of accidents and now more attention is being paid to how guardrails absorb impact. In cases where the guardrail does not absorb impact properly, the injuries suffered are far worse than they would have been had the guardrail not existed at all.

You’ve been impaled by a guardrail. Does that mean you have to sue the government? The answer is probably not. While the government paid a company to install the guardrails, it’s the company’s shoddy workmanship and the failure of their team of physicists that resulted in numerous preventable deaths. Hence, you can avoid suing the government in most of these cases, instead suing the manufacturer of the guardrails. The lawsuit would be filed under a theory of defective design. Since the guardrails splinter into sharp hard metal, they are defective for the purpose of guarding. In fact, they are more likely to cause injury than prevent it. Hence, the company manufactured a product that was defective for its only purpose. The company is thus liable for any injuries and deaths that occur. They are also liable to the state which now has to remove and replace all of the defective guardrails.

Right now, there are at least two states that have sued guardrail manufacturers to recoup the costs of removing and replacing defective guardrails. These efforts have come in the wake of several injuries and deaths resulting from splintered guardrails causing injury to a driver who would otherwise have been okay. The scope of these injuries run the gamut from flesh wounds to death to amputation injuries. So, we’re talking about serious money settlements emerging from this product.

Halpern, Santos & Pinkert represents the interests of Florida residents injured by dangerous or defective products. Call our Florida personal injury lawyers today to schedule a free consultation and learn more about how we can help.