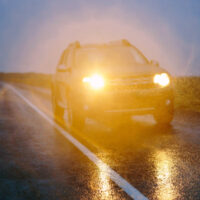 Have you ever had a truck or an SUV pull up behind you and suddenly, you can’t see a thing? You’re wondering if their high beams are on or if they just make the standing lights too darn bright. According to a federal recall that GM hoped to avoid, it was the latter. Now, GM is being forced to recall certain models of GMC Terrain SUVs because its standing lights are simply too bright causing visual impairment for other drivers. Terrains manufactured between 2010 and 2017 are subject to recall.

The National Highway Traffic Safety Administration (NHTSA) determined that the lights were three times brighter than regulatory limits, prompting the recall. The lights can make it difficult for other drivers to see the road and may lead to distraction and accidents.

No injuries or accidents have been reported due to the oversight. GM had hoped to avoid recalling the vehicles. Around 727,000 vehicles would be subject to the recall if GM elects not to contest the ruling.

Generally speaking, auto manufacturers advertise recalls when there is a risk to their customers. In this case, GM’s vehicles are creating a risk to other drivers on the road. Most auto part recalls are spurred forth on the basis that the driver has an incentive to take care of the issue. Dealerships handle adjustments and repairs to recalled vehicles, and the driver drives the car off feeling safer inside of it. In this case, the drivers themselves are not at risk. The headlights on their vehicles are creating problems for other drivers on the road. While the risk of causing an accident is bad, it is unlikely that the driver in the Terrain will be the one impacted by the lights.

Nonetheless, there is a liability issue. If a driver is driving an unprepared GM Terrain, they could be held liable if their lights created a visibility issue for another driver who then caused an accident. The driver could claim that they couldn’t see where they were going because of the brightness of the lights behind them. Perhaps that’s why they made a left-hand turn when there was traffic approaching from the other direction. They couldn’t see the vehicle approaching and thought it was clear. Such an allegation could be provable in court and result in a lawsuit both against the driver, who did not get their vehicle serviced when the recall was issued, and GM for creating a dangerous condition on U.S. highways. It’s awkward to blame another driver for an accident, but a good personal injury attorney can establish a foundation for the case by referencing this recall.

When a known defect causes injury or accident, you are entitled to recover damages from the manufacturer of the auto part or vehicle. Call the Florida personal injury attorneys Halpern, Santos & Pinkert today to schedule a free consultation and learn more about how we can help.