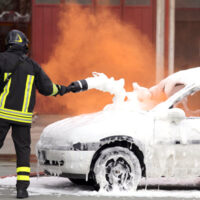 Before we get into the nuts and bolts of this suit, there is a term you should be aware of: PFAS. These chemicals are used for heat and grease resistance and are found in the foam that firefighters use to suppress fires. The foam is generally placed in a fire extinguisher under intense pressure/heat. The energy of heat is exchanged into the energy of motion and the foam comes out cold to the touch.

While every human and animal has some PFAS in their body, firefighters are under increased risk of developing cancers and PFAS is being blamed for causing these cancers. Below, we’ll look at some indications that PFAS may be responsible for a higher-than-average uptick of cancer in the firefighting population.

The leading cause of death among firefighters is…

If you said “fire”, you’d be wrong. The majority of firefighters die of cancer. Firefighters are exposed to numerous toxins with the context of their job, so the question becomes: How do we know PFAS are responsible for the uptick in cancer? The answer is: We really don’t “know” that it is for a fact. But we know that PFAS is a potential cancer-causing agent and we suspect that it may have contributed to the uptick in cancers found in firefighters. Burning asbestos may be just as likely to cause cancer in firefighters than PFAS.

Firefighters were twice as likely to die of mesothelioma than the general population. Mesothelioma is a very rare cancer caused primarily by asbestos. However, testicular cancer accounted for the majority of firefighter cancers. Firefighters are 2.02 times more likely to develop testicular cancer than the general population. However, skin cancer, brain cancer, non-Hodgkin’s lymphoma, leukemia, and colon cancer were all more likely for firefighters than you or I.

PFAS or something else?

Firefighters are exposed to numerous chemicals while on the job. The situation is made worse by aerosolized toxins in smoke. The use of PPE protects firefighters to some degree, but their skin shows higher levels of PAHS. Thus far, PFAS is not associated with any study discussing the uptick in cancer among firefighters. However, it has been associated with other cancer lawsuits. Right now, we lack details to make a firm conclusion on why firefighters get cancer more often than the general population. But research continues.

Halpern, Santos & Pinkert represent the interests of Florida residents in product liability claims against major companies. Call our Florida personal injury lawyers today to schedule a free consultation and we can begin discussing your allegations immediately.