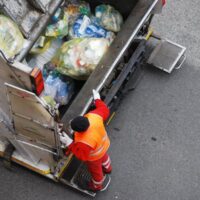 The family of a homeless woman who was struck and killed by a garbage truck has filed a lawsuit against the driver and his company. The plaintiffs contend that the accident was preventable. The 57-year-old woman was asleep in a sleeping bag when the garbage truck ran her over, crushing her skull. Her family has since filed an $800,000 wrongful death lawsuit against the driver and company.

The issue has brought the rights of the homeless to the forefront with plaintiffs raising the alarm that the public at large needs to be more aware of them.

How the situation unfolded

The homeless woman was going to eat at a Christian food bank when she was told she could not bring her bike inside. Needing food, she left the bike outside where it was promptly stolen. She decided to sleep in a red sleeping bank outside of the food bank. The driver proceeded to empty bins in the parking lot, but ended up hitting the woman. According to the plaintiffs, he backed into her, but he should have been able to see the woman had he been paying sufficient attention.

After striking the woman, the truck lurched upward triggering the onboard crash camera. The driver drove off without checking what he had hit, according to the complaint. Later, the company that employed the driver allegedly stonewalled the investigation. When police came to see the truck, they refused to turn it over and forced police to get a warrant.

An investigation determined that the driver had committed no wrongdoing and the incident was simply a tragic mistake.

The fact that the driver was not criminally charged does not mean that the lawsuit against the company is not winnable. Standards in criminal cases are higher than those in civil cases. If a prosecutor says that they can’t prove something beyond a reasonable doubt, they’re usually right. When a civil litigator says that they can still prove the case by a preponderance of the evidence, they are also usually right.

In a case like this, you have a careless act that led to injury. However, in a negligence suit, you must establish that the allegedly-negligent party owed the individual a duty of care. Incidents involving the deaths of homeless people are not uncommon. Homeless people sometimes sleep under trucks to avoid the elements. What duty of care does the driver owe to the homeless person who places themselves in a vulnerable and dangerous position? In Florida, lawsuits such as these are easier to pursue because so long as the defendant is even 1% responsible for an injury, they are liable for that 1% responsibility. So, if the blame is split 50/50, the family could still get some recovery and make their point.

If you or a loved one has been injured in an accident involving a commercial vehicle, contact the Florida personal injury attorneys at Halpern, Santos & Pinkert today and we can begin preparing your claim immediately.