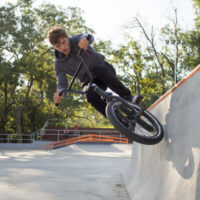 What is the leading cause of death and injury for children aged 0-4 and 15-19 years of age? The answer is: Traumatic brain injury. The United States has an average of over 300,000 such injuries each year. You might assume that the vast majority of these injuries are related to sports and playgrounds, but in fact, a growing number of cases are related to consumer products. This has resulted in the generation of a new acronym: CP-TBI or consumer product-related traumatic brain injury.

A recent study published in the American Journal of Preventive Medicine tracked the progress of those who suffered a traumatic brain injury in their youth over a 20-year period. The goal of the study was to implement policies that would prevent such injuries in the future.

There has been a major uptick in the number of recreational motor vehicles that are marketed to children. These include dirt bikes and other small vehicles that can achieve speeds of 30 mph or more. In other cases, motorized scooters have contributed a growing number of brain injuries. In other words, there are more products available to children that can result in TBI and other injuries.

The study tracked injuries since 2000 and noted a decided uptick in brain injuries in children. In 2019, CP-TBI accounted for 12% of all emergency room admissions for school-aged children. In 2000, that number was around 4.5%. The annual increase in CP-TBI-related admissions was 3.6%. While boys remain at higher risk than girls, girls actually saw their percentage of CP-TBI-related incidents increase the most.

Incidents of sports-related TBI in school-aged children have actually decreased in boys over the past handful of years but increased in girls. The general consensus surrounding this fact is that more effort is necessary to reduce TBI in girls’ sports. While girls don’t generally play football, which contributes the most to concussions, we’re still seeing an uptick in the number of girls who go to the emergency room each year for TBI. Such injuries go by the acronym SRR-TBI (sports and recreational activities. Bicycling and football accounted for the majority of these incidents.

While the overall number of CP-TBI and SRR-TBI incidents decreased among boys after more awareness was raised around the issue, the same cannot be said for girls who continue to see increases. This is likely due to the fact that specific sports like football and hockey were targeted after lawsuits by former players. Now, more is being done to prevent and treat TBI properly to avoid lifelong complications.

The data shows that more attention paid to preventing TBI is working. The number of TBIs among boys continues to decline. The study indicates we should make the same effort to prevent TBI in girls’ sports.

Halpern, Santos & Pinkert have the resources and experience you need to take on a major corporation. If you or your child has been injured due to a defective product, call our Florida personal injury lawyers today and we can begin preparing your lawsuit immediately.