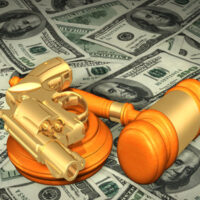 Broadly speaking, the answer is no. However, there is a small window of liability for gun manufacturers when it comes to marketing their products to dangerous individuals. In 1875, Remington introduced its latest model, “the outlaw” to compete with Colt’s single-action army revolvers. Today, we don’t name guns after criminals because we don’t want to market guns for illegal purposes. However, ad-targeting algorithms sometimes dump AR-15 ads into the timelines of at-risk youth. Such lawsuits have been successfully litigated and won on the grounds that the marketing placed a weapon in the hands of an individual who was likely to use it for a mass shooting. So, mass shooting victims can file lawsuits against gun manufacturers if they can establish that the manufacturer’s marketing targeted a demographic that was likely to use it for something bad like a mass shooting.

Plaintiffs are attempting to get a lawsuit in front of a jury after Robert Crimo III opened fire on a Chicago crowd on Independence Day. One of the victims has filed a lawsuit against Smith & Wesson on the grounds that they illegally marketed their firearms to teenagers by “gamifying” their ads or making the ads appear like popular video games such as Call of Duty. Attorneys for the plaintiff contend that this marketing campaign targeted at-risk youth like Crimo who were fans of popular first-person shooters like Call of Duty.

While the strategy has proven difficult for defendants to get dismissed outright, a lawsuit of this type would be the first since 2005 when Congress passed legislation protecting gun manufacturers from the criminal activity of their customers.

Since 2014, it has been illegal to advertise guns on television placing it alongside cigarettes as one of the few products that are unlawful to market. However, television is not what it used to be and fewer people are glued to the tube than ever before. Instead, they are glued to their phones and laptops where Google ads run in the background of every online interaction they have. Gun manufacturers are targeting teen males because algorithms show that they are interested in weapons. However, what level of responsibility do social media companies and gun manufacturers have to the public?

In reality, they have very little responsibility to the public. It is not even clear whether the marketing lawsuits will work in front of a jury or the case will be allowed to go in front of a jury. However, the problem is obvious. Video games are a space where your conduct has no repercussions. Mixing that space with reality is dangerous and the marketing geniuses at S&P not only know that but are exploiting it to increase revenue.

Halpern, Santos & Pinkert represent the interests of those injured by a dangerous or defective product. Call our Florida personal injury attorneys today to schedule a free consultation and we can begin discussing your lawsuit immediately.